Introduction to the Sculpture Trail

The sculpture trail will create a world quality visitor experience spanning the fields and communities of South West Leicestershire. It comprises of a series of 6 significant works of art commissioned to mark the events of 1485 and the subsequent history and impact. It will complement the stories told at Bosworth Battlefield Heritage Centre and the Richard III visitors centre.

Connected by a walking trail at it's full length of 20 km, the works of arts aim to be accessible to as wide an audience as possible, linking in closely both with the locations pivotal to the Battle and more recently the communities involved in the reinternment of Richard III. 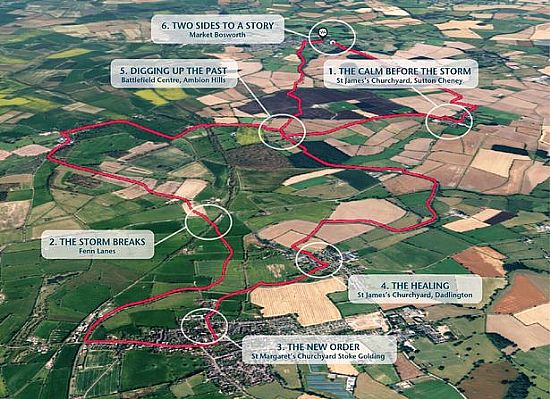 What will the trail achieve?

A cultural resource in the historic landscape which articulates the events of August 1485 in an interactive and participative way and brings this history into the present day. Collectively the installations and the trail itself tell the story through sculpture and interpretation; individually each artwork will become a significant new attraction to provoke dialogue and debate not only about the past but about themes and issues relevant today.

The trail will create an important new cultural and tourism destination for local people and visitors, increasing direct economic benefits to the area and compliment and bring trade to Bosworth Battlefield and Leicestershire attractions.

It will enhance local pride and community cohesion in the rural communities of Shenton, Sutton Cheney, Dadlington, Stoke Golding and Market Bosworth and for urban areas such as Hinckley and Leicester.

It will provide an all-weather and all-season outdoor recreational facility, giving opportunities for group, family and individual activities, encouraging participation as part of social prescribing and active health initiatives. The trail will also facilitate improved infrastructure in local hospitality, beverage and food services, shops, taxi and other transport providers.

Each of the 6 installations will be built to the highest standards and made to last around 50 years. Each will be different, created to suit its setting and its place in the story. Interpretation will be the result of research and development between the communities and local schools with the commissioned artists to represent each stage of the story. Proposals have been developed as the starting point for this collaboration and co-curation. The first installation at Sutton Cheney church represents contemplation on the eve of the battle (Calm before the Storm). The second (The Storm breaks) represents the battle site and the third, at Stoke Golding, Henry's victory. At Dadlington church lie the remains of many of those who fell in the battle and will be the site of an artwork about healing and reconciliation. Bosworth Battlefield Heritage Centre will display artwork representing archaeology and digging up the past. The trail ends in Market Bosworth highlighting the local marketplace and a place where people in the past and the present come together for debate, storytelling and performance.

The project is supported by Hinckley and Bosworth Borough Council (HBBC) the Richard III society, Bosworth Battlefield Heritage Centre, Parish churches of Dadlington, Market Bosworth and Sutton Cheney, Leicestershire Promotions Ltd, Ashby Canal Association and several landowners and private individuals. Consultation is ongoing with schools and colleges, people and importantly parishes. A range of stakeholders and beneficiaries will also be involved as the project develops. Local schools and colleges are invited to be involved actively in a heritage project to research and curate creative resources which may well be used in the trail design and interpretation.

How much will it cost and how will the project be supported in the future?

The trail installations and signage/ interpretation will cost around £500,000 potentially rising to £1,000,000 subject to securing external funding. Includes artworks creation, installation and related technical costs, signage and interpretation and project fees. Improvements to the right of way network or additional promotion and signage are not included. Positive discussions so far have been held with Arts Council England (Midlands region) Heritage Lottery Fund (East Midlands Region) for the schools project, HBBC and Richard III Society. In kind contributions are already identified from volunteer input at a community level for local activities and facility usage. Ongoing discussions are taking place with the private sector and business community for capital contributions.

Once the trail is completed the responsibility for overseeing the maintenance and promotion will pass to a consortium of representatives from local communities and landowners, with HBBC as the responsible body.

The project will be delivered in three stages:

Involved the consultation and engagement among local communities of three possible schemes and design approaches. Funded by the Arts Council - £18,000.

Appointments of Broadbent Studios as the preferred artists.

This stage involves listening and working with local stakeholders and community representatives and assessing the landscape. This determines the type, nature and setting of each of the components of the trail. The six pieces of art have been shared at a public consultation event held in Dadlington.

Currently the sights are a mixture of churches, public spaces, a heritage centre and green spaces. There is no plan to change the use of any of the sites, rather to enhance their historical context and meaning both individually and as part of the trail.

There are ongoing discussions with parishes regarding the final designs.

The third stage will be the delivery of the trail through the design, manufacture and installation of the artworks across the sites. A range of promising funding sources have already been identified , including Arts Council, Heritage Lottery and LLEP, which will enable the project to be realised using external funding.

‘Inspiring Bosworth’ is a separate project, which has run in parallel with the development of the art trail. It has been made possible by funding support from the National Lottery Heritage Fund and the Dixie Educational Foundation.

The ‘Inspiring Bosworth’ project has worked with local communities and schools to engage and inspire them with and about the development of the Bosworth 1485 Sculpture Trail. The trail is a rural route which will link the six key locations of the Battle using rights of way, canal paths and village lanes. Each location will be represented through sculpture and other art forms. Work on this major capital project is now under development.

‘Inspiring Bosworth’ has provided an opportunity for local schools to shape the interpretation of the trail through education, outreach and creative activities. The project has focused on the archaeology, artefacts and landscape of the battle scene. There have been opportunities for people to handle artefacts and listen to and learn from historians and archaeologists. There have also been opportunities for schools and communities to create their own works of art, with professional artists, based around the themes of the sculptures.

The project has engaged and inspired the communities of Market Bosworth, Sutton Cheney, Dadlington and Stoke Golding and further afield. It will leave a lasting legacy of the Battle of Bosworth and the events since which still continue to shape our communities today.

An exhibition, showcasing the work from the project is at Bosworth Battlefield Heritage Centre until September 2020. However, the Centre is presently closed due to the Covonavirus - as soon as the Centre is open the exhibition will be accessible once again.